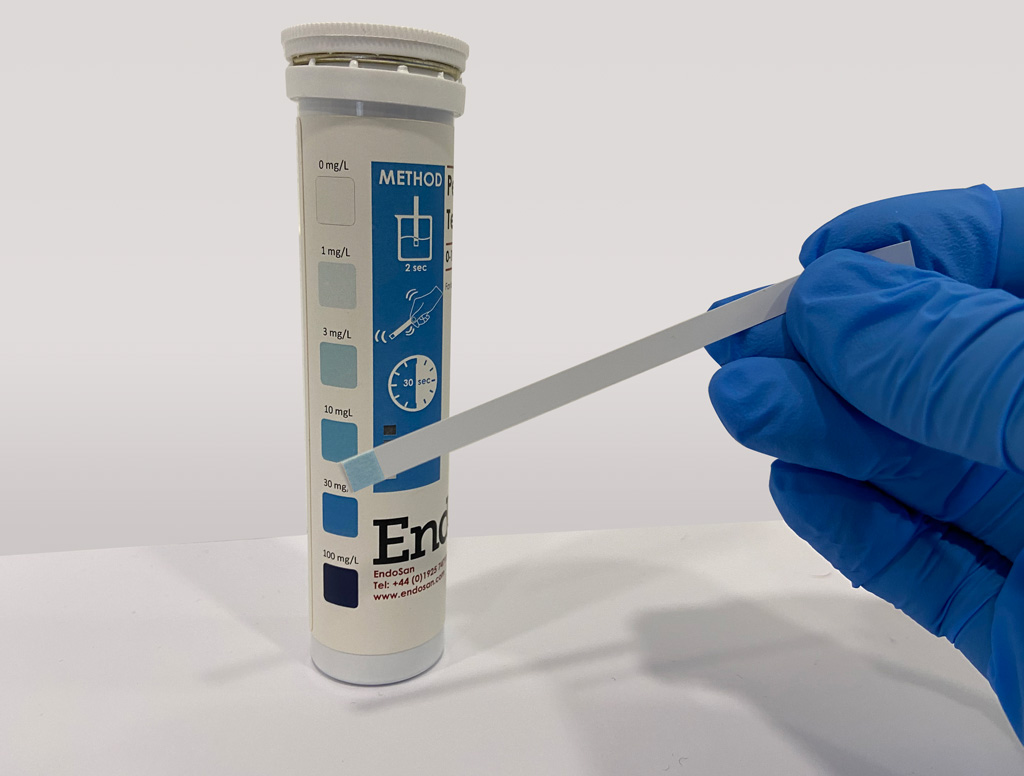 What are Hydrogen Peroxide Test Strips?

Hydrogen peroxide test strips are an indicator to measure the residual concentration of hydrogen peroxide in a solution. They are stored in a plastic packaging container or vial to protect them from exposure to sunlight and moisture retaining shelf life, usually in a quantity of 100 strips.

The test strips consist of a stiff strip of plastic which is white to provide for good colour and contrast comparison. At the end of the strip is an indicator pad which reacts with hydrogen peroxide changing colour to signify an indication of detected peroxide concentration.

Provided with the test strip (usually on the container) is a colour chart which displays the indicative hydrogen peroxide concentration range the test strips detect and is used to compare to strips directly side by side.

Test strips give a quick and easy evaluation and are inexpensive when compared with electronic measuring equipment which also needs regular calibration.

Hydrogen peroxide reacts with peroxidase (POD) and the organic redox indicator pad on the test strip which forms an oxidation compound that is blue coloured.

Depending on the concentration of the peroxide being exposed to the test strip indicator pad will change colour to display a result for comparison with the provided colour chart.

What ranges of test strip are available?

EndoSan test strips are available in 3 ranges which are suitable for detecting different peroxide ranges and lend themselves to different use cases. The ranges available are:

How do you use hydrogen peroxide test strips?

Test strips provide a quick and easy visual indicator of the levels of peroxide in any solution.

Test Strip Instructions for use:

Please contact a member of the team for any instructions specific to your application and to ensure correct use of the appropriate range of test strips (low, high or extra high range).

The instructions above will cover most use cases where a residual peroxide level needs to be detected in a solution, however test strips can also be very useful in other applications.

How should test strips be stored?

To maximise test strip lifespan avoid exposing them to sunlight and moisture. Where possible refrigerate unopened containers. Once opened store containers in a cool (not refrigerated), dark, dry place. When removing test strips take only as many strips as are required and close the container immediately. Use all test strips before the expiration date marked on the container, strips can be disposed of as normal waste.

This website uses cookies to improve your experience while you navigate through the website. Out of these, the cookies that are categorized as necessary are stored on your browser as they are essential for the working of basic functionalities of the website. We also use third-party cookies that help us analyze and understand how you use this website. These cookies will be stored in your browser only with your consent. You also have the option to opt-out of these cookies. But opting out of some of these cookies may affect your browsing experience.
Necessary Always Enabled
Necessary cookies are absolutely essential for the website to function properly. This category only includes cookies that ensures basic functionalities and security features of the website. These cookies do not store any personal information.
Non-necessary
Any cookies that may not be particularly necessary for the website to function and is used specifically to collect user personal data via analytics, ads, other embedded contents are termed as non-necessary cookies. It is mandatory to procure user consent prior to running these cookies on your website.
SAVE & ACCEPT