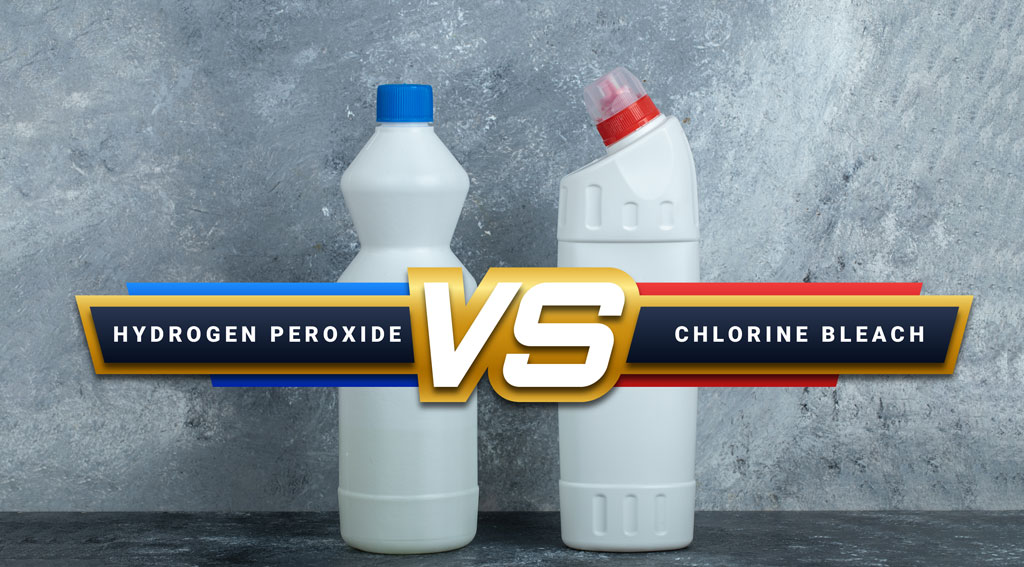 Bleach can have multiple definitions whether you are referring to is as a process or a disinfectant.

“verb used with object:
to make whiter or lighter in colour, as by exposure to sunlight or a chemical agent; remove the colour from.”

Bleach is also defined by Wikipedia as:

“the generic name for any chemical product that is used industrially and domestically to remove colour from a fabric or fiber or to clean or to remove stains in a process called bleaching. It often refers, specifically, to a dilute solution of sodium hypochlorite, also called “liquid bleach”.”

In this article we will be comparing the chemical product, liquid bleach which is based on chlorine chemistry with hydrogen peroxide.

What is Chlorine Bleach?

Bleach products have mild to strong irritant properties. Even at low concentrations an unpleasant chlorine smell is detectable that can irritate the throat and lungs. It can dry and irritate skin and the eyes even in low dose rates as found in swimming pools or treated water.

If chlorine bleach comes into contact with ammonia or products that contain acid (common ingredients of other disinfection or cleaning products) chlorine gas can be formed and released.

What is Hydrogen Peroxide?

Although not commonly referred to as “bleach” hydrogen peroxide is one of the most common bleaching agents. Unlike liquid bleach based on chlorine chemistry, hydrogen peroxide is a more selective bleaching agent which causes less textile fibre damage, making it ideal for applications such as pulp bleaching in the paper industry.
Hydrogen peroxide bleaches in the same way as chlorine, it oxidises chromophones, essentially taking the electrons that hold atoms together causing molecules that cause staining to fall apart.

Unlike liquid chlorine based bleach products however, hydrogen peroxide forms no harmful by-products of disinfection. Hydrogen peroxide simply degrades into water and oxygen making it one of the most eco-compatible and biodegradable disinfectants available.

The oxidization process of hydrogen peroxide is highly reactive making the solution unstable and unable to maintain effectiveness for long periods of time. Hydrogen peroxide will react with all organic materials it comes into contact with which can also reduce effectiveness depending on the application.

Hydrogen Peroxide vs Bleach – Which is better?

To summarise it is clear that both hydrogen peroxide and chlorine-based bleach are both oxidisers that are capable of being effective bleaching agents. Chlorine-based bleach is an all-round disinfectant that carries the risk of forming toxic or hazardous by-products and has unfortunate irritant properties to the nose and throat.

Hydrogen peroxide on the other hand carries none of the toxicity concerns that chlorine bleach does but suffers from short lasting oxidization power.

This website uses cookies to improve your experience while you navigate through the website. Out of these, the cookies that are categorized as necessary are stored on your browser as they are essential for the working of basic functionalities of the website. We also use third-party cookies that help us analyze and understand how you use this website. These cookies will be stored in your browser only with your consent. You also have the option to opt-out of these cookies. But opting out of some of these cookies may affect your browsing experience.
Necessary Always Enabled
Necessary cookies are absolutely essential for the website to function properly. This category only includes cookies that ensures basic functionalities and security features of the website. These cookies do not store any personal information.
Non-necessary
Any cookies that may not be particularly necessary for the website to function and is used specifically to collect user personal data via analytics, ads, other embedded contents are termed as non-necessary cookies. It is mandatory to procure user consent prior to running these cookies on your website.
SAVE & ACCEPT